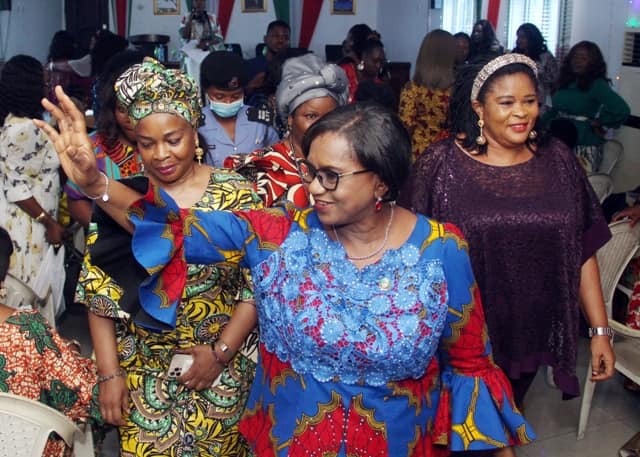 Rivers State Deputy Governor, Dr. (Mrs) Ipalibo Harry Banigo has described the State Chief Executive, Nyesom Ezenwo Wike as the pillar of democracy and the face of good governance.
Dr. Banigo stated this while speaking at a meeting with elected female leaders of the Peoples Democratic Party, Rivers State, at the PDP Secretariat in Port Harcourt on Tuesday, 5th April 2022.
“I thank our Governor for creating the political space for women to come out and contribute, he is the pillar of democracy the face of good governance, today the international community is talking about Rivers State, we are in a state where women are contributing. I want to thank you all for your unflinching support for his government, since 2015, you have been by him and praying for him. You have to be patient in politics. The mantra of politics is loyalty”. Dr. Banigo stressed.
The Deputy Governor who urged women to show competence in any position they find themselves said women have the capacity, they know what to do in any given situation and they have the heart to work and perform excellently, adding that they were in their positions to show exemplary conduct and mentor other young people.
In her speech Hon. Linda Somiari Stewart, a member of the Rivers State House of Assembly Representing Okrika Constituency said Women were gradually moving from the era of sloganeering to the era of hard work, noting that a lot of women in the State were in a position today because of Governor Wike’s gender friendly disposition.
In her welcome remarks, the State Women Leader of the Peoples Democratic Party (PDP), Mrs Mirian Ogbonna expressed the need for women to unite and love themselves, stressing that leaders of the party at various levels must be respected.
Owupele Benebo
Head of Press
Office of the Deputy Governor
Tuesday, 5th April 2022.
www.thenewriversstate.com

Previous Swearing-in of Hon. Justice Ihemnacho Wilfred Obuzor as the Substantive. Next WE HAVE IMPROVED ALL TIERS OF SERVICE DELIVERY IN THE HEALTH SECTOR: Dr .Banigo