WIKE APPROVES THE IMMEDIATE PAYMENT OF PENSIONS TO 1,191 ADDITIONAL RETIREES 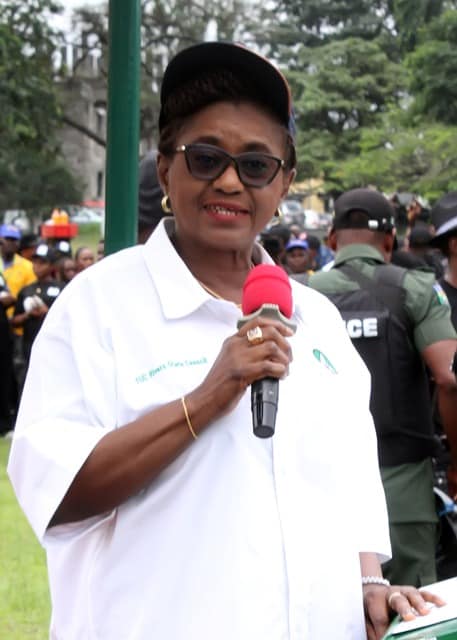 WIKE APPROVES THE IMMEDIATE PAYMENT OF PENSIONS TO 1,191 ADDITIONAL RETIREES

The Rivers State Government has approved the immediate release of monthly pensions for additional 1,191 retirees from the Rivers State Civil Service.
The State Chief Executive, Nyesom Ezenwo Wike disclosed this during the celebration of the 2022 Workers Day at Isaac Boro Park, Port Harcourt, on Monday, 2nd May, 2022.
Represented by his Deputy, Dr. (Mrs) Ipalibo Harry Banigo, Governor Wike said the payment took immediate effect from the Month of April 2022, stressing that the payments were received between Thursday and Friday last week.
Governor Wike, who reaffirmed his Administration’s commitment to the welfare of workers, said under his watch, salaries are paid to all workers in the public sector promptly and provides monthly overhead costs to enable them perform their functions and run their offices effectively.
“Rivers State Government pays salaries to all workers in the public sector promptly and provides monthly overheads to enable them perform their functions and run their offices effectively. …”Government has paid all outstanding monthly pensions up till date for all who have completed their biometrics.
“The Governor of Rivers State, His Excellency Governor Wike approved the release of monthly pensions for additives 1,191 retirees from the Rivers State civil service, which payment took immediate effect from the month of April 2022 and was effected precisely on Thursday/Friday last week. Now Rivers state is committed to the welfare of our workers.”
He said Government also provides impress to all Schools under SUBEB and the Secondary Schools Board, which has eliminated illegal levies to our students.
Governor Wike expressed regrets, that the State NLC Chair Person, Comrade Beatrice Itubo who had in the past, applauded him as a most worker friendly Governor, was the first to criticize his presidential ambition.
The Governor described the theme for this year’s May Day Celebration,” Labour, Politics, the Quest for Good Governance and National Development”, as apt, in view of the current socio-economic and security challenges foisted on the people of Nigeria by the All Progressives Congress (APC) led Federal Government.
While noting that the Rivers State Government has been able to surmount most security challenges to give workers in the State a safe environment to work in, Governor Wike wished all workers in the State and their counterparts world wide a Happy May Day Celebration.
“There is no development that can reasonably be achieved in the face of massive insecurity, banditry and herdsmen carnage that has pervaded our dear nation in the recent past.
Rivers State under the watch of his Excellency, Governor Wike has been able to surmount the security challenges within her domain to give the workers in Rivers State a safe environment to work in.”
The Governor, who described Civil Servants as the engine room of government, urged public and private workers in the state to remain productive and committed to carrying out their duties.
Governor Wike assured the workers that the recommendation of the tripartite committee will be adequately addressed.
“I do believe that we will continue to work together, be productive in our work. Its the cooperation between government and labour we need to be able to improve the welfare of our workers.”
In her remarks the State Chairperson of Nigerian Labour Congress, Comrade Beatrice Itubo, said the labour family was delighted with the State Government’s payment of pension arrears to retirees and implored them to implement the recommendations contained in the tripartite committee reports.
She particularly commended the State Governor for leading the fight against illegal bunkering head-on
“Let me seize this opportunity to commend Rivers State Government for the actions it has taken so far on this matter, which has made the soot, that tended to become part of our reality to disappear”
“It took just a matching order from the Governor to Local Government Council Chairman, traditional rulers and other critical stakeholders for illegal bunkering and illegal refining of crude oil to drastically reduce.” she stressed.
The NLC Chairman commended the Government for effectively tackling insecurity in the State.
“We can proudly say on good authority that in spite of the fact that criminality has assumed a much more sophisticated dimension globally, security situation in Rivers State is getting better than what it use to be a few years ago. The Government of Rivers State deserves credit for this.”
She urged the Federal Government to redouble its efforts in safeguarding the lives of the Nigerian people by tackling the security challenges facing the country.
The labour leader reminded workers of the State to note that their welfare in the coming years depends on the people they give their mandate to in 2023, and urged them to get their PVCs, while urging political gladiators to play politics with civility.
Also Speaking, the State TUC Chairman, Comrade Austin Jonah commended workers for their tenacity, sacrifice and determined contributions to the development of the State, while commending Governor Nyesom Ezenwo Wike for the prompt payment of workers’ salaries as well as his recourse to dialogue as a social tool for reconciling industrial disputes in the State.
Owupele Benebo
Head of Press
Office of the Deputy Governor
Monday, 2nd May 2022.
www.thenewriversstate.com
—
Rivers State Government House
Office of the Deputy Governor
Government House Complex
P.M.B 5050
Port Harcourt
www.thenewriversstate.com
Previous BANIGO ATTRIBUTES THE SUCCESSES OF THE WIKE LED ADMINISTRATION TO GOD Next FAMILY PLANNING INDICES IMPROVES IN RIVERS STATE: BANIGO