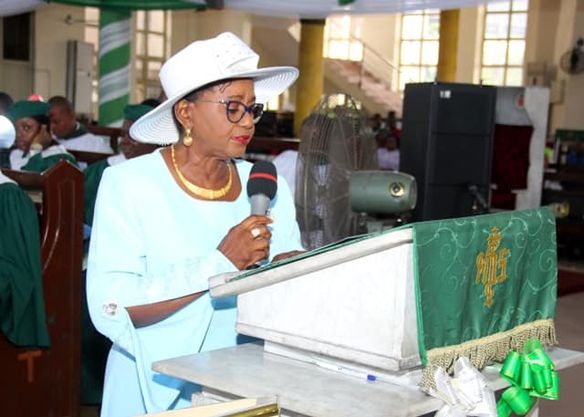 The State Chief Executive Nyesom Ezenwo Wike has urged Nigerians to take the upcoming 2023 General Elections seriously by securing their PVCs and using it wisely and prayerfully.
Governor Wike stated this during the Inter-Denominational Church Service in commemoration of the 62nd Independence Day Anniversary of Nigeria, at St. Paul’s Cathedral Church, Diobu in Port Harcourt on Sunday 25th September 2022.
Represented by his Deputy, Dr. (Mrs.) Ipalibo Harry Banigo, Governor Wike said he believes God would use the 2023 election to grant all our pleas as Nigerians, for a rebirth of a new nation.
“Nigeria must rise again, it must fulfil its divine purpose for which God has put it together, Nigeria has a prophetic agenda, whether the devil likes it or not. We must have the confidence that our votes will count and that we will use our votes to bring in the leaders after the heart of God”. The Governor quipped.
Governor Wike said under his watch, the State Government has been resolute and consistent in providing the dividends of democracy to the people living and doing business in the State.
“We have seen it, in the massive improvement in security, we have seen it in social and physical infrastructure, what will you say, when public tertiary institutions have been on strike for the past seven months, and some of the students are being killed, some are roaming about, some are going into crime, while others are abusing drugs and going mental, but in Rivers State, all the State institutions are functioning, none stop and salaries are paid as at when due and lecturers are teaching the way they should”. Governor Wike further stressed.
The State Chief Executive, expressed gratitude to the Almighty God for the 62nd independence anniversary of the Country and for keeping the nation as one in spite of all the security and economic challenges, adding that God in His infinite mercy has kept us together as a people, what seems impossible with men, is possible with God.
In his Sermon drawn from Matthew Chapter 7: 7-12 Bishop Diocese of Niger Delta North Rt. Rev. Wisdom Budu Ihunwo said if Nigeria must go forward we must obey the golden rule.
He said we must not give up on Nigeria no matter the challenges God would make the nation great again but it behooves on us to pray and do the right things at all time.
Owupele Benebo
Head of Press
Deputy Governor’s Office, Port Harcourt.
Sunday, September 25th 2022.
www.thenewriversstate.com
Rivers State Government House
Office of the Deputy Governor
Government House Complex
P.M.B 5050
Port Harcourt
www.thenewriversstate.com
Previous HAVE A BROAD VISION FOR THE DEVELOPMENT OF THE BONNY KINGDOM: BANIGO Next BANIGO HINTS ON THE DANGERS OF OVER POPULATION