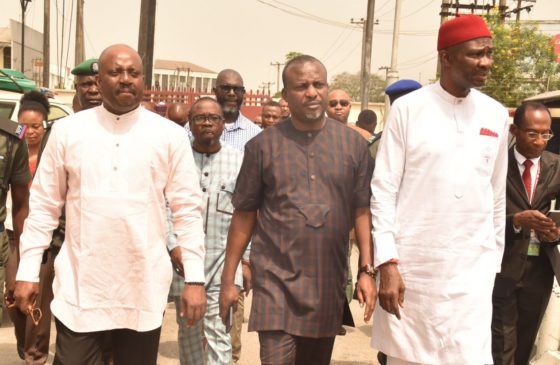 Pondei announced this at his maiden meeting with NDDC management and staff in Port Harcourt, a statement by the commission’s Director of Corporate Affairs, Mr Charles Odili on Friday stated.

News Agency of Nigeria reports that President Muhammadu Buhari had on Wednesday replaced Ms Joi Nunieh with Pondei in the newly-expanded five-man Interim Management Committee (IMC) of the commission.

The committee was set up by Buhari to help create an “enabling environment” for the forensic audit of the commission’s finances and contracts starting from 2001.

According to Pondei, NDDC will soon be reorganised to enhance its service delivery and reduce sufferings of the people.

“We need to have quality assurance and measurable performance indicators in every unit and department of NDDC.

“I am a problem solver by training, and as such, pray that members of the IMC will work together to solve problems.

“We must come up with ways of seriously improving on our service delivery by paying attention to efficiency and quality.

“Every department in NDDC will need to come up with new work plans and we need to have measurable indices in those work plans,” he said.

Pondei said that NDDC was in “trouble,” having spent about 20 years since its creation without making much progress.

The managing director said that Buhari was passionate about welfare of Niger Delta people, hence his decision to adopt new strategies in tackling problems of the region.

“Buhari decided that since we have done the same thing, using the same method and getting the same result, that it was time to try something different.

“To this end, members of the new IMC have resolved to work together as an indivisible team. We also need to work in harmony with NDDC management and staff.

“Feelers from members of the public show that NDDC staff were seen as contributing to problems of the region,” he said. (NAN)