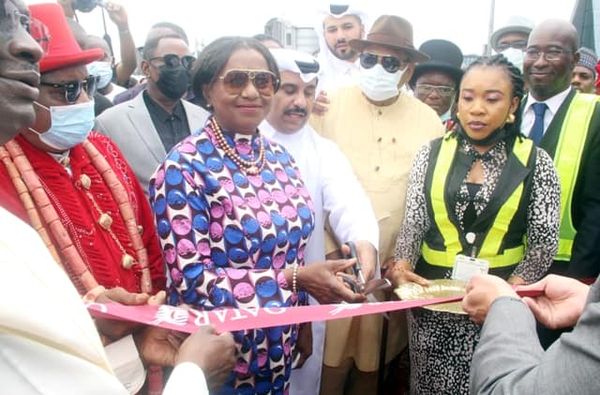 The Rivers State Government says it has developed and is implementing an Ease of Doing Business Policy Framework that has enhanced the development, growth and sustainability of businesses in Rives State.
The State Chief Executive Nyesom Ezenwo Wike stated this while speaking during the Qatar Airways Inaugural Fight at the Port Harcourt International Airport, Omagwa on Thursday, 3rd March 2022.
Represented by his Deputy Dr. (Mrs) Ipalibo Harry Banigo, Governor Wike said “This is happening at a very auspicious time, when we in Rivers State are witnessing a total infrastructural renaissance, we are building ten flyovers, six has been commissioned three will be commissioned next month and one next year”.
Governor Wike said Qatar Airways, choosing Port Harcourt the Garden City of Nigeria, as a destination would further enhance the economic activities within the region, increase the economy of our nation and bring in foreign investments into the Country.
The Governor who said he was delighted to officially receive the Inaugural Flight of Qatar Airways to Port Harcourt, Rivers State, thanked the Federal Aviation Authority of Nigeria and Qatar Airways for choosing Port Harcourt as a destination of choice.
In his remarks, Nigeria’s Ambassador to Qatar Yakubu Ahmed, said this event would facilitate closer ties, mutual trust and trigger areas of interest between Nigeria and Qatar, noting that these connections has the potential to push the frontiers of bilateral relations towards a more robust cooperation in oil and gas.
Also speaking the Qatar Ambassador to Nigeria Dr. Ali Al-Hajri, who said they were proud of the occasion disclosed that it was a bridge between Rivers State, Nigeria and the World through the Middle East, noting that it was an important effort that would make Nigeria the largest market in Africa.
Earlier Qatar Airways Vice President Africa, Hendrik du Perez who expressed gratitude to the Rivers State Government for its hospitality, described Port Harcourt as an important economic hub in Nigeria and expressed the hope that this new flight would link Rivers State to the world’s financial market and Petro Chemical hub.
Owupele Benebo
Head of Press
Office of the Deputy Governor
Thursday, 3rd March 2022.
www.thenewriversstate.com
Rivers State Government House
Office of the Deputy Governor
Government House Complex
P.M.B 5050
Port Harcourt