GOD HAS BEEN MERCIFUL TO US: BANIGO 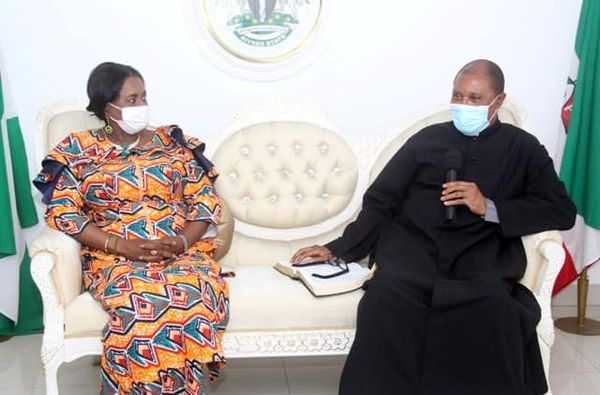 GOD HAS BEEN MERCIFUL TO US: BANIGO

The Deputy Governor of Rivers State Dr. (Mrs) Ipalibo Harry Banigo DSSRS, has expressed gratitude to the Almighty God for being merciful to the Governor Wike-led Administration.
Dr. Banigo expressed this while playing host to the Parish Church Council of St Alban’s Anglican Church, Obuama at the Government House in Port Harcourt on Tuesday, 22nd February 2022.
According to the Deputy Governor, God has helped the Governor to strategize and construct projects in places where the projects are needed such as education, health, infrastructure, and security, including the recent clampdown on oil bunkering (Kpo- fire) activities.
“The way Kpo-fire has been killing youths is alarming, somebody was describing it that their bodies are covered in crude oil, their skin is virtually getting burnt, they have respiratory problems and it is so terrible, it is so sad, we need to really help our young people”. The Deputy Governor quipped.
Dr. Banigo expressed gratitude to the Parish Church Council of St. Alban’s Anglican Church for the honour bestowed on her during the 2021 Annual Harvest Thanksgiving Service of the Church.
She said the plaque presented to her was the best she had received in the past seven years in view of the fact that the plaque came from her home Church, which is also her Grandfather, and, her Father’s Church.
In his remarks, the Vicar of St Alban’s Anglican Church Ven. Abbey-Kalio said they were at the Government House to thank the Governor and his Deputy for their efforts and doggedness to ensure that the State moves on.
He said they were also at the Government House to appreciate her for her support to the Church, noting that she has continued to be a woman of substance, credibility, and a pillar of strength to the Church.
Owupele Benebo
Head of Press
Office of the Deputy Governor
Tuesday, 22nd February 2022.
Rivers State Deputy Governor, Dr. (Mrs.) Ipalibo Harry Banigo with Ven. A. C. Abbey-Kalio during a Courtesy Visit by St. Alban’s Anglican Church, Obuama Parish Church Council (PCC) at the Government House, Port Harcourt on the 22nd Feb. 2022.
Rivers State Government House
Office of the Deputy Governor
Government House Complex
P.M.B 5050
Port Harcourt
www.thenewriversstate.com 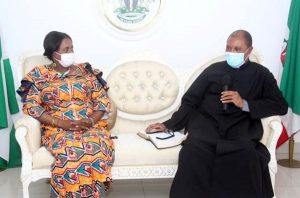 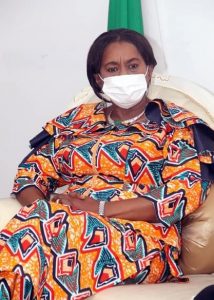 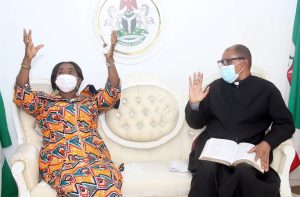 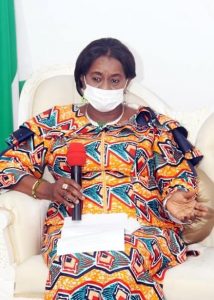 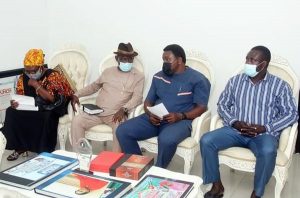 Previous CONSTRUCTION OF COMMUNITY SECONDARY SCHOOL OBUAMA EXCITES BANIGO Next THE RIVERS STATE GOVERNMENT HAS PROVIDED A HIGHLY STREAMLINED SYSTEM OF TRAFFIC CONTROL IN THE STATE, BASED ON THE QUALITY OF FLYOVERS WITH STREET AND TRAFFIC SIGNAL LIGHTS