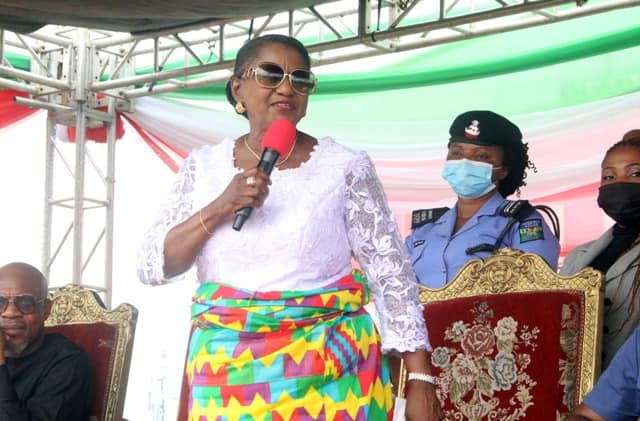 The State Chief Executive, Nyesom Ezenwo Wike has urged Nigerian Women to dust their voter’s cards and vote out the All Progressives Congress-led Federal Government in Nigeria.
Governor Wike stated this while receiving scores of APC decampees into the Peoples Democratic Party (PDP) at the Rumueme Civic Centre, in Port Harcourt on Tuesday 8th March 2022.
Represented by his Deputy, Dr. (Mrs) Ipalibo Harry Banigo, Governor Wike assured them that they were welcome back to their home, into the umbrella, under which they would be secured and have stomach infrastructure with a leader where everyone’s face would be shining.
Governor Wike who congratulated Women on the International Women’s Day Celebration said it was unfortunate that we have a Government at the center, which has refused to recognize the role of women.
He said the Government has despised women to a point that five gender bills were wiped off, because there was no internal democracy in them, adding that these people came together because they were hungry for power, they did not come with a plan to make this nation greater.
“All the promises they made they have kept none, but with us, it is a promise made promise fulfilled. Our women should dust their voter’s cards and vote them out because they do not have any good intentions there is no internal democracy with them, ordinary congress they cannot organize, confusion everywhere, if a party cannot conduct congress, how can they lead”. The Governor stressed.
Governor Wike assured the decampees, that they would be recognized in the PDP and would be given their rightful positions to play their role, stressing that the umbrella was big enough to contain everybody.
The Governor who stressed that the development of the State under his watch was unappalled said all the PDP-led States were passionate about their people and are all grassroots developers, noting that in terms of infrastructure, there are projects in all the 23 Local Government Areas of the State.
Earlier the State Chairman of the Peoples Democratic Party, Ambassador Desmond Akawor while welcoming back the decampees, said a lot of the returnees had strayed into the APC with all sorts of deceit, and the empty promises made by the APC, in 2015, and having seen the developmental strides of Governor Wike in the State, decided to abandon the sinking APC ship and embraced the Peoples Democratic Party.
According to the Chairman the recent move by the Government in power, through the legislative arm, has relegated women into the background, noting that Nigerian women have taken a decision never to allow the APC to govern the Country again.
Responding on behalf of the Decampees, the immediate past APC State Treasurer Mr. Owhor Kinikanwo Friday, said their decision to return back to the PDP was inspired by the blazing performance of Governor Wike in various sectors of the State, adding that they were proud to be associated with his good works for Rivers State.
Owupele Benebo
Head of Press
Office of the Deputy Governor
Tuesday, 8th March 2022
www.thenewriversstate.com
Photo speaks :